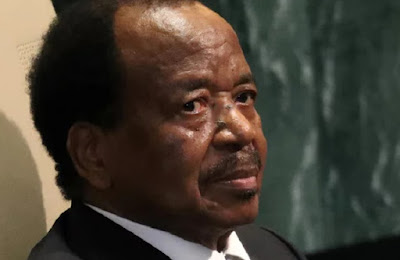 A leading member of a separatist movement in
Cameroon has been taken into custody in Nigeria with his aides, according to sources.

The once-fringe anglophone movement in Cameroon, a majority French-speaking country, has gathered strength in the past few months following a military crackdown. It represents the gravest challenge yet to the 35-year rule of the president, Paul Biya, who will seek re-election this year.
Julius Ayuk Tabe, the Nigeria-based chairman of the Governing Council of Ambazonia separatist movement, was taken into custody alongside six others at a hotel in Abuja on Friday, both a Nigerian official and the separatist group said.
Separatists, including armed radical elements, seek an independent state for the nation’s anglophone regions they call Ambazonia.
Bilateral relations between Nigeria and Cameroon have been strained as thousands of Cameroonians have fled violence by travelling across the border. Cameroonian troops last month crossed into Nigeria in pursuit of rebels without seeking Nigerian authorisation, causing diplomatic wrangling behind the scenes.
A Nigerian official said Tabe and six of his supporters were placed in custody on Friday evening. “They were having a meeting at Nera hotels in Abuja,” the official said on condition of anonymity.
The separatist group later issued a statement saying that Tabe and six others were taken from Nera hotels by Cameroonian gunmen in an “illegal abduction”.
The unrest in Cameroon began in November, when English-speaking teachers and lawyers in the north-west and south-west regions of Cameroon, frustrated with having to work in French, took to the streets calling for reforms and greater autonomy.
French is the official language for most of Cameroon but English is spoken in two regions that border Nigeria.
Protests by separatists prompted a violent crackdown by Cameroon’s military last year in which troops opened fire on demonstrators.

… we have a small favour to ask. More people are reading the Guardian than ever but advertising revenues across the media are falling fast. And unlike many news organisations, we haven’t put up a paywall – we want to keep our journalism as open as we can. So you can see why we need to ask for your help. The Guardian’s independent, investigative journalism takes a lot of time, money and hard work to produce. But we do it because we believe our perspective matters – because it might well be your perspective, too.

"I appreciate there not being a paywall: it is more democratic for the media to be available for all and not a commodity to be purchased by a few. I’m happy to make a contribution so others with less means still have access to information.Thomasine F-R."

If everyone who reads our reporting, who likes it, helps fund it, our future would be much more secure. For as little as £1, you can support the Guardian – and it only takes a minute. Thank you.