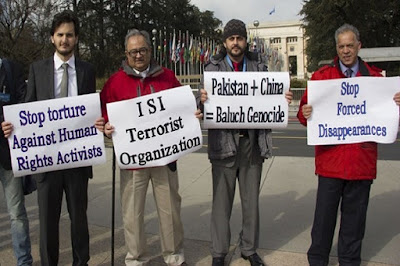 Brad Adams the director of the Asia branch of HRW has said that the Pakistani government has not done enough to stop the violence, which include torture, enforced disappearances of those suspected of either terrorism or opposing the military, ill treatment of those suspected of criminal activity, and extrajudicial killings. Marc Tarabella, the vice-chair of the European Parliament's delegation for relations with the countries of Southeast Asia and the association of Southeast Asian nations (ASEAN), has called reports of the human rights situation "alarming" and stated that the "main victims" of the violence are Balochistanis who "are being systematically targeted by paramilitary groups, allegedly sponsored by the Pakistani authorities."
Background:
There were a further three insurgencies in the region after 1948: 1958–1959, 1962–1963 and 1973–1977, and a fifth nationalistic movement began in 2002. The 1958–1959 conflict was caused by the imposition of the One Unit plan which had been implemented in 1955. This led to further resistance, and by 1957 Nauroz Khan announced his intention to secede; Pakistan declared martial law one day later. Pakistan bombed villages and deployed tanks with support from artillery. Nauroz was arrested and died while in prison, his family members were hanged for treason. According to Dan Slater, pro independence feelings in East Pakistan and Balochistan increased in parity with continuing military intervention in the political arena.

Missing persons:
According to an 8 December 2005 statement, by the then Pakistani interior minister Aftab Sherpao, an estimated 4000 people from Balochistan in the custody of the authorities having been detained in the province between 2002–2005. Of this number only 200 were taken to court and the rest were being held incommunicado according to author Manan Dwivedi writing in 2009.
However, in early 2011 The Guardian newspaper reported that "several human rights groups, including Amnesty International" had documents "more than 100 bodies" found dumped in Balochistan, many "mutilated corpses bearing the signs of torture" – "lawyers, students, taxi drivers, farm workers." According to EU MP Marc Tarabella, based on collated newspaper reports, the number of those "killed after abduction ... exceed 2000". According to Ashraf Sherjan, president of the Germany Chapter of the Baloch Republican Party, "families of enforced-disappeared Balochs" report that between 1999 and 2015, "more than 20,000 Balochs have disappeared".
Military and paramilitary abuses:
In 2012 statement to the Supreme Court, the Pakistani government denied allegations of the use of secret operations, or death squads in Balochistan. According to Major General Obaid Ullah Khan Niazi, commander of the 46,000 paramilitary Frontier Corps stationed in Balochistan, militants impersonating his soldiers are killing civilians. "Militants are using FC uniforms to kidnap people and malign our good name." However, Balochistan’s former chief minister Sardar Akhtar Jan Mengal, in a statement to the Supreme Court, claimed the current civil disturbances in Balochistan were a direct result of enforced disappearances.

Religious persecution of minorities:
Hindus:
Shia:
Many hundreds of Shia Muslims have been killed in northern areas of Pakistan such as Gilgit, Baltistan, Parachinar and Chelas. In 2002, 12 Shia police cadets were gunned down in Quetta. In 2003, 53 people died and 150 were critically injured in a suicide attack on the main Shia Friday mosque in Quetta. On March 2, 2004, at least 42 persons were killed and more than 100 wounded when a procession of Shia Muslims was attacked by Sunni extremists at Liaquat Bazaar in Quetta. On October 7, 2004, a car bomb killed 40 members of an extremist Sunni organization in Multan. 300 people died during 2006. On December 28, 2009, as many as 40 Shias were killed in an apparent suicide bombing in Karachi. The bomber attacked a Shia procession which was held to mark Ashura.

Many youth from the Hazara community have had to flee to Europe and Australia, often illegally, in order to escape the oppression.

Baloch insurgents:
Journalists, teachers, students, and human rights defenders have been targeted in Balochistan according to the South Asia Terrorism Portal.The U.S. Department of State estimates that in 2012 at least 690 civilians were victims of violence in Balochistan. A report from the Interior Ministry in 2012 stated that Lashkar-e-Jhangvi, Lashkar-e-Balochistan, Baloch Musalla Difa Tanzeem, and the Baloch Liberation Army were involved in violent disturbances. The Human Rights Commission of Pakistan estimates that these groups and others killed 2,050 innocent persons and injured another 3,822 in 2012.

International reactions:
During an all-party meeting in Delhi, Indian prime minister Narendra Modi said that Pakistan "shall have to answer to the world for the atrocities committed by it against people in Baluchistan." Minister of State for External Affairs M. J. Akbar, during a speech at New York City, said, "Nations created in the name of faith supremacy are coming apart. That is why Bangladesh happened in 1971 and Balochistan is simmering now." Modi's remarks came during the unrest in Indian Kashmir, a territory disputed between both countries, where Pakistan condemned the alleged state human rights violations. Bangladesh's information minister Hasanul Haq Inu, during a visit to India, said that Balochistan is burdened by Pakistan's military establishment. He said, "Pakistan has a very bad track record as far as addressing aspiration of nationalities is concerned. They learnt nothing from the defeat of 1971 and continued to practice the same policy of repression and are now targeting the Baloch nationalists." Former President of Afghanistan Hamid Karzai, also interviewed by the press while in India, appreciated Modi for his comments on Balochistan, and said that, "In Balochistan there is extreme suffering at the hands of extremists promoted by state structures in Pakistan. Therefore the people's concerns need to be addressed and aired." Pakistan's foreign policy adviser Sartaj Aziz said Modi's statement was "self-incriminating", vindicating Pakistani accusations of Indian intelligence involvement in Balochistan's insurgency, and called it an attempt to divert attention from the Kashmir violence.President of Afghanistan Ashraf Ghani, speaking at the Institute for Defence Studies and Analyses, said, "There is war in Pakistan which media doesn't speak about, there are 207,000 Pak forces in Khyber Pakhtunkhwa and Balochistan. This violence needs coverage and understanding and needs to be stopped." In the 33rd session of the United Nations Human Rights Council, India raised the issue of human rights violations in Baluchistan, saying that "the people of Balochistan, amongst other provinces, have been waging for decades a bitter and brave struggle against their daily abuse and torture."
Postado por FINES às 06:00