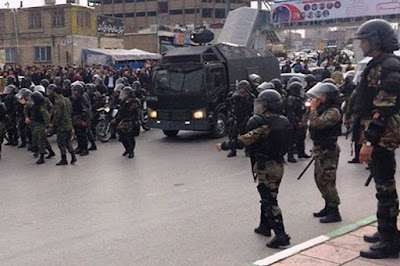 Human rights abuses in Iran are plentiful, but this January has seen them soar as a result of the Iranian Regime’s crackdown on the protesters who called for regime change.

Crackdown on protesters:
Deaths:
Of those who died under torture, the Regime has claimed that they committed suicide, despite clear signs of torture on the bodies.
Arrests:
There are at least 15 people arrested or summoned during the protests who haven’t been seen or heard from since, including students, teachers, and engineers. Their families have attempted to find out their fates and have staged protest rallies outside of various prisons but their requests were met with tear gas and air shots by the prison authorities.

Other human rights violations:
Human rights violations not directly related to the protests:
Executions:
There are also two political prisoners who are at risk of imminent executions, but it is reported that they are being held to convince one of their fathers to hand himself in.

Arbitrary murders:
Deaths in custody:
Inhuman punishments:
Many of these punishments were levied out for things, like having a secret relationship, drinking wine, and hunting during the offseason.

The political prisoners have been wildly mistreated in prison with threats against their lives, the cancelling of all leave (including medical) because they refused to disavow the protests, the vicus beatings of Sunni prisoners in Rajaie Shahr Prison, and the raid in Central Prison.
They are also denying adequate medical care to many, including those under torture.
This is just a summary and the full list of crimes against the Iranian people by the Regime can be found here.