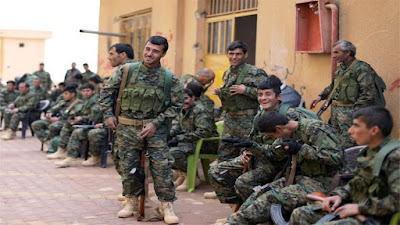 Fighters from a new border security force under the command of the Syrian Democratic Forces (SDF) sit together during a graduation ceremony in Hasaka, northeastern Syria, January 20, 2018. (Photo: Reuters/Rodi Said)

AFRIN, Syrian Kurdistan (Kurdistan 24) – The Kurdish-led Syrian Democratic Forces (SDF) on Thursday claimed to have killed dozens of Turkish soldiers while preventing them from advancing into Syria’s Kurdish-run northwest region of Afrin.
“Our forces carried out a special military operation against the invading Turkish army in Bukeh village. As a result, they killed 15 Turkish soldiers and wounded several others,” the SDF, of which the Syrian Kurdish People Protection Units (YPG) is a leading element, said in an online statement.
In the village of Khalil in the western countryside of Afrin, the SDF said they killed three other Turkish soldiers, impeding the forces’ advance in Syrian Kurdistan (known in Kurdish as Rojava).
In Rajo district west of Afrin, the SDF affirmed they destroyed two armored vehicles belonging to the Turkish military.
“In a special military operation carried out by our forces against the invading Turkish army, our forces could destroy two vehicles loaded with Doshka weapon in Shangila village in Rajo district, and as a result, two Turkish soldiers were killed,” the SDF statement read.

Regarding casualties on the Syrian side, the UK-based Syrian Observatory for Human Rights (SOHR), a monitoring group in the war-torn country which traces the conflict on the ground, announced that Turkish artillery and warplanes killed 68 Syrian civilians, including 21 children and 12 women.
Additionally, the Turkish army targeted ancient sites and mosques in the Afrin region.

“The Turkish military destroyed archeological sites dating back more than 1400 years and demolished the Salahaddin Mosque in the town of Raju, all while Turkish president [Recep Tayyip] Erdogan claims he defends Muslims,” the SOHR statement read.

Another mosque was bombed in Jandaris on Thursday, the SDF reported. 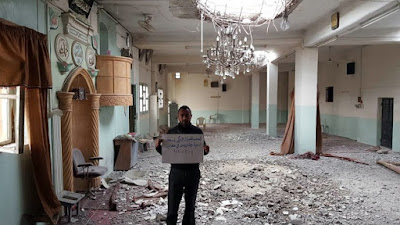 Ankara has denied hitting civilians in its military operations, but hospitals in Afrin say they are receiving civilian casualties on a daily basis.
Turkey’s operation against the YPG in Afrin began about two weeks ago and includes heavy bombardment but limited advances by its army or allied Syrian rebel groups.
Since the breakout of Syria’s conflict in 2011, the Syrian Kurdish YPG and its allies have set up three autonomous cantons in the north, including Afrin which borders Turkey.
Syrian rebel factions, which are fighting alongside Turkey in its offensive, control territory around Afrin. The Syrian army also holds a patch of land bordering the canton.